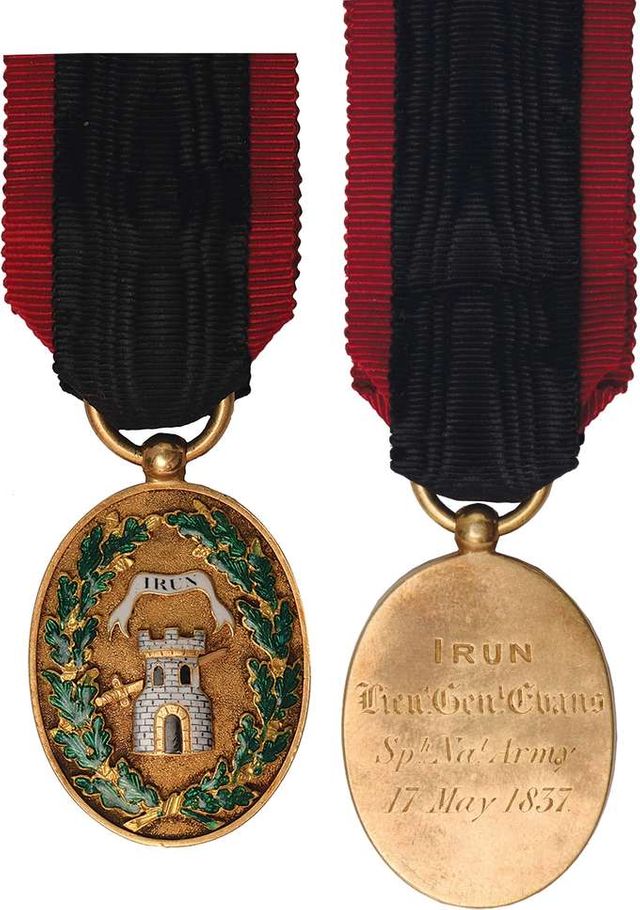 World Orders and Decorations, Irun Medal (Officers), awarded to Lieutenant General Evans, Spanish National Army ( IRUN Lieut. Genl. Evans Sp’ Na’ Army 17 May 1837 ), very fine After research the most likely recipient of this medal is believed to be General Sir George de Lacy Evans, born 1787 in Moig, County Limerick. General Evans fought with the British Army in the War of 1812, where he served at the burning of Washington, Quatre Bras and Waterloo, the First Carlist War, where he commanded the British Legion, and the Crimean War. He was made a Knight Grand Cross of the Order of the Bath and a Grand Cross of the Legion of Honour. He served as Member of Parliament for Rye from 1830 to 1832 and Westminster 1833-41 and 1846-65. He died on the 9 th January 1870 and is buried in Kensal Green Cemetery, London. His medals are on display at the Queen’s Own Royal Hussars Museum, Warwick. In May 1837, while the bulk of the Carlist Army was absent on the Royal Expedition, the troops of the Liberal garrison of San Sebastian led by Lacy Evans, Commander of the British Auxiliary Legion, launched an offensive to take the joining the city with the French border. They had just received reinforcements from troops in Portugalete and close to 20,000 men left San Sebastian to take Lezo, Rentería, Astigarraga and Hernani on the 14th and 15th of May. Espartero set up base in Hernani, in order to protect Evans' troops, which were heading to Oiartzun and the mouth of the river Bidasoa. The Carlists abandoned Oiartzun when they saw Jáuregui's division advancing, but decided to stand firm in Irun. This garrison was defended at the fort of "El Parque" and the Town Hall, which had been fortified for the occasion. Just 500 Carlists, made up of troops and volunteers, faced Evans' 12,000 men, 5,000 of whom were British and recently humiliated in the Battle of Oriamendi. On the afternoon of the 16th, the British artillery began bombarding, but only managed to take the houses outside the city walls. The offensive began again at daybreak on the 17th and lasted all day because of the strong Carlist defence. The Liberal cannons were not powerful enough, so they were forced to attack with the infantry and take the city almost house by house, suffering many casualties in the act. The Town Hall and fort finally surrendered that same afternoon. The long, drawn-out battle and numerous casualties gave rise to the sacking of the town, mainly by the British troops. Hondarribia surrendered the day after without resistance. The Guipuzcoan border was now controlled by the Liberals.